Farmed salmon vs. wild salmon. Which is healthier? Well, you may be surprised to find out that farmed salmon has toxic contents and can be dangerous. Learn what to avoid when you get salmon at the store. 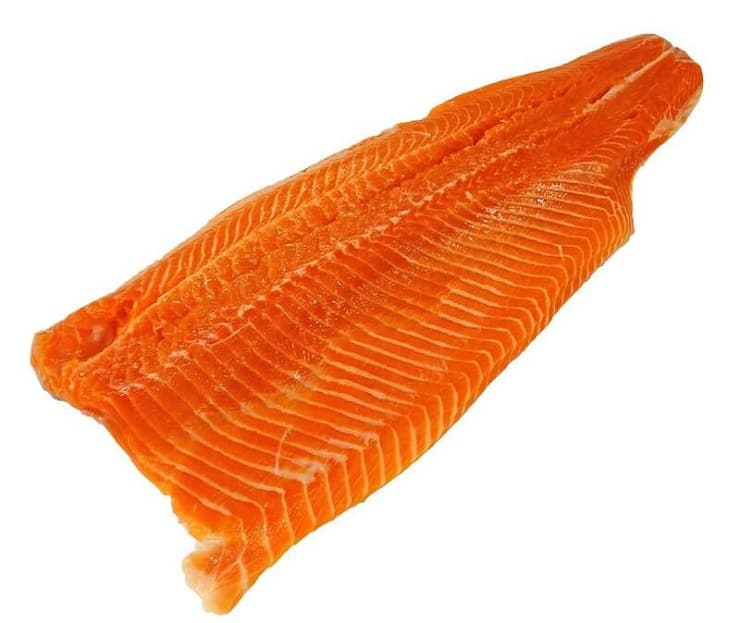 It seems that not a day goes by when I do not read an article about the importance of getting Omega-3 fatty acids into our diet. The best place to find these naturally, of course, is in fatty fish like salmon.

What you need to know about eating and buying salmon, however, is that there is a huge difference when it comes to wild versus farmed salmon. Most of the salmon sold at supermarkets and restaurants is not good wild-caught salmon. It is most commonly farmed salmon, which comes from fish farms or what is called “aquaculture.”

Is farmed salmon bad for you?

Well, there are a lot of problems with farmed salmon and all of them are pretty bad.

First, let me explain the difference between wild and farmed salmon, and then let me tell you the top reasons why you should avoid buying or eating farmed salmon.

The difference between Wild Salmon and Farmed Salmon

Wild salmon is caught fresh from oceans and rivers, in their natural habitats. They feed on natural food in their environments, algae, smaller fish, plankton and other natural foods. Farmed salmon, however, is raised in submerged pens and often given feed that contain small ground fish, fish waste by product and GMO corn and soy that helps it grow larger faster and yield more fish.

When you take a close look at the scary facts associated with farmed salmon, I think you’ll want to make the extra effort to find wild caught salmon.

1. Farmed Salmon Has Higher Contents of Inflammatory Fats that Hurt Your Health

First, let’s compare the nutrient density and fat profile in farmed salmon versus wild caught salmon, because there are huge differences between them.

Farmed salmon may be richer in some fatty acids and vitamin C, but the Vitamin C is added to the fish feed and not naturally contained in the salmon. We know that synthetic vitamins added to food is very hard for the body to recognize and absorb. So you may actually just end up excreting the added vitamins through your urine.

When it comes to minerals, however, wild salmon is rich in them, boasting healthy stores of potassium, magnesium, and iron.

But the fat profile is where we get the big difference. When it comes to essential fatty acids (EFAs), the right balance between omega-3 and omega-6 fatty acids is vital to good health. We Americans are over-consuming omega-6 fats from corn, soy and factory farmed meat from animals who consume corn and soy. Consuming high levels of omega-6s and low levels of omega-3s has been linked to higher instances of disease (read more about this here).

Farmed salmon has 3 times higher inflammatory omega-6 fatty acid content, which is probably due to the corn and soy fed to farmed fish. However, the nutritional profile is not the worst thing about farmed salmon. Even though the fat profile is better in wild salmon, there’s not an enormous difference between the two nutritionally, since farmed salmon still has high omega-3 content. However, the rest of the reasons listed below may make you swear off of farmed salmon for life. 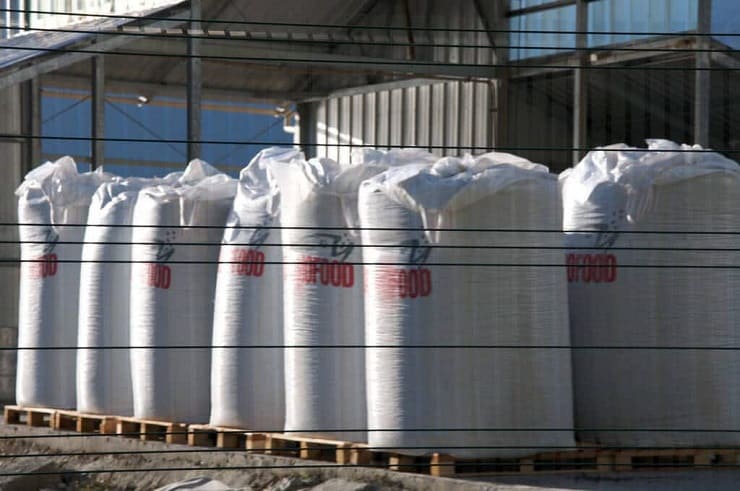 2. Farmed Salmon is Given Supplements Made from Petrochemicals to Give it A Pink Color

Wild salmon is pink because of its diet, which is rich in krill, shrimp, and crustaceans. This natural diet provides high amounts of carotenoids like astaxanthin and canthaxanthin along with a blend of other beneficial antioxidants. These antioxidants are what give salmon its pink color, but they also contribute to it’s health benefits.

Farm raised salmon on the other hand is given feed like corn and soy (which is far from what a fish would naturally eat…and is akin to someone eating junk food cereal all day every day). Because salmon isn’t given natural food that provides these beneficial antioxidants, it tends to be grey instead of pink.

You may have heard that salmon is injected with pink dye. Well, that is simply not true, at least not in the US. However, the alternative is not much better. 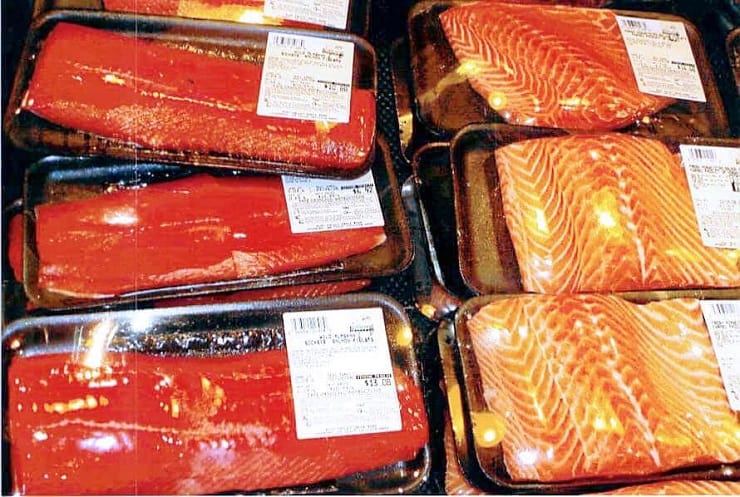 Although yes, our waters are becoming more contaminated and all wild fish absorb at least some contaminants from the waters they swim in, farmed salmon live in less sanitary fisheries in very concentrated pens that are loaded with contaminants of all kinds.

A 2004 study, found that the contaminants in farmed raised salmon are significantly higher in PBDE’s which are toxins that bioaccumulate in the body and can cause a myriad of health issues.

PBDEs have been associated with hormonal and thyroid disruption, brain damage and cancer. 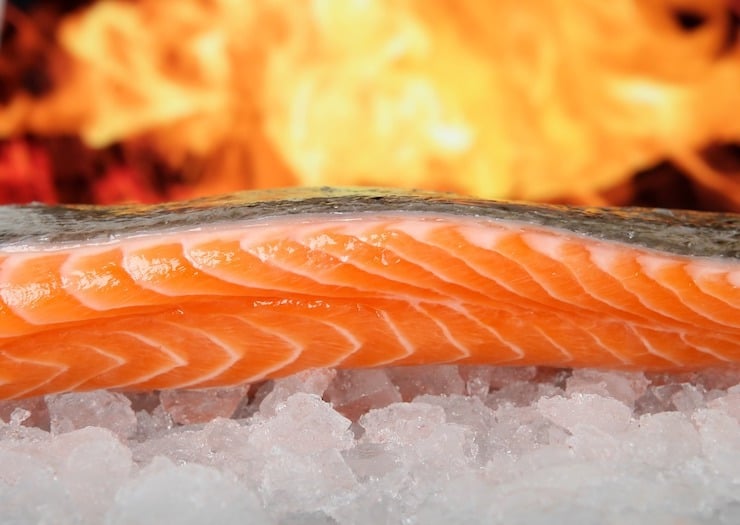 The contaminants and pesticides used to farm salmon are very detrimental to the environment.

The kinds of contaminants and pollutants at fish farms such as chemicals and pesticides of all kinds, not to mention the strong concentrated antibiotics fish farmers use in effort not to spread disease from fish population to fish population, are damaging local areas where fish farms are located.

Fish lice is a big problem with salmon farms, for example, and many of the drugs used to kill this sea louse can penetrate the air, move to other waters, and contaminate the environment for miles. 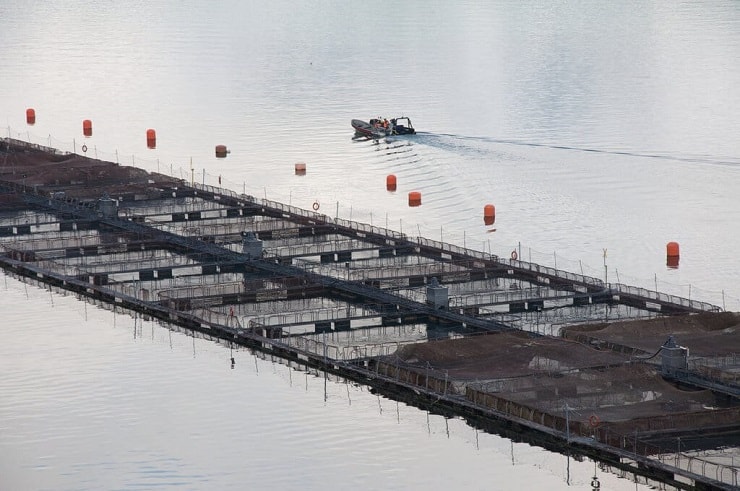 Where Can You Get Wild Caught Salmon?

Now that you’ve learned about all of the reasons to avoid farmed salmon, you might want to know where you can get healthier wild salmon.

When buying salmon, you’ll want to make sure that it says “wild” on the package. Don’t be fooled by healthy-sounding terms like “organic”, “imported” or “natural” although it sounds good, it usually just means that they are farmed.

Even though there aren’t strict guidelines for what constitutes organic farmed fish in the US yet, other countries have begun labelling their farmed fish as organic and it’s still unclear what that means. I imagine that it means the fish were fed organic feed which likely would still contain corn and soy (albeit organic corn and soy…not better for the fish at all).

Although it may seem like wild caught salmon can be hard to find, I’ve actually been able to find it in a plethora of places including basic grocery stores!

Buying wild salmon frozen is a great option and is available at many grocery stores. 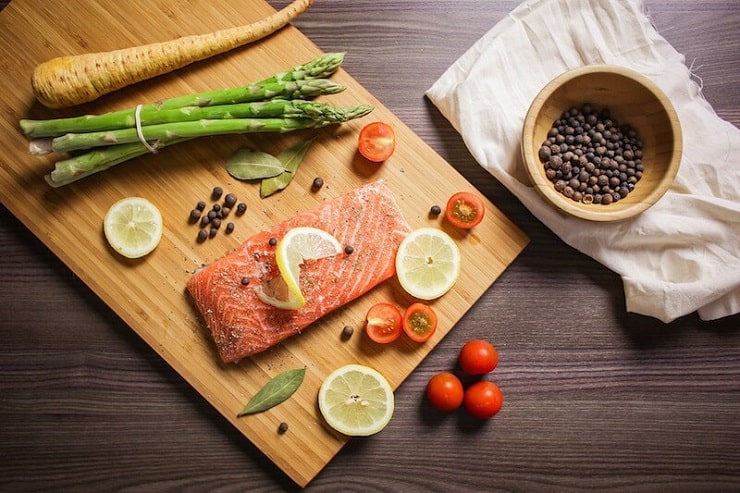 This article was originally posted in December of 2016 but has been republished in October of 2018 to include a new video and updated research.